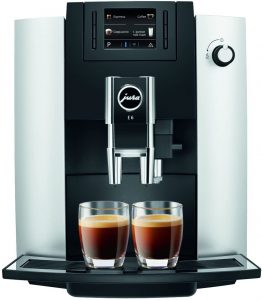 With a slim design and sleek vertical lines, the Jura E6 super automatic espresso machine is sure to be a head turner.

The Jura E6 is quite capable too, thanks to a large water tank, smart filter system, signature grinder, and quality built brew unit. The Jura E6 will work until your heart’s content whipping up espressos, cappuccinos, americanos, and even warm milk before bedtime.

For the price Jura is asking you to pay, it gives back in more than adequate ways. The Jura E6 is high capacity, highly capable, and fully automatic. The screen is easy to read and program. The water capacity is refreshingly generous.

The interior boiler and brew group is made with high-quality parts. So yes, we’d say this super automatic espresso machine is worth your money, even if part of the cost is in the Jura name.

The Jura E6 contains all of what you’d expect from a Jura, and then some. While it doesn’t do everything, the Jura E6 has a whole lot to offer.

One of the Jura E6’s shining stars is the Jura Smart Water Filter system. With the smart filter, the machine will tell you when the time has come to replace the filter. Just input your water hardness level taken from the test strip provided, and the machine will do the rest.

While the machine is busy keeping the water clean it will also maintain the brew group cleanliness too. As these machines don’t have removable brew groups, Jura goes above and beyond to clean its brew group with every espresso making cycle, automatically.

The Jura E6 features more programmability than less expensive models. You’ll be able to program up to seven different drinks, adjust the temperature, fine tune coffee strength within eight levels (6 to 16 grams), and change peripheral settings such as language and auto shut off.

Steamed milk pours directly to the same cup espresso flows into from the brew head. You can control how much milk goes into each cup with the touch of a button. But, like many home espresso machines, you won’t be able to customize the type of foam that’s produced. 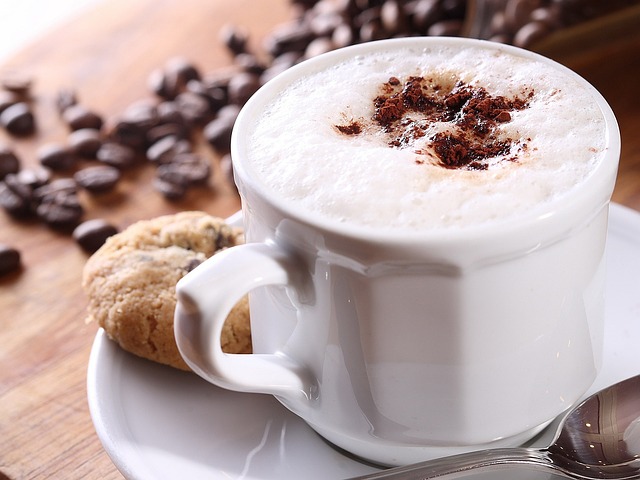 Moving up from the Impressa C65 in the “ease of use” category, the E6 is can be operated simply. The LCD screen clearly shows you which option you’re on so you can easily customize your favorite drink settings, or set secondary settings.

Milk steaming is easy too. The only user involvement required is turning the steam knob on to activate the process, then turning it off again when prompted by the machine.

Reliability is synonymous with the Jura name. So it is no surprise to us that the Jura E6 is just as dependable as other machines in the Jura line.

The thermoblock boiler is made from stainless steel-lined aluminum. The brew group is a permanently housed device that’s automatically cleaned with every use. And, the cappuccinatore can be cleaned with Jura’s special milk cleaning solution.

Priced a bit over $1000 you’re paying for the added programmability, more convenient milk steaming, and easy to read screen with the Jura E6. Other than that, it’s almost the same machine as the lower priced Jura Impressa C65.

But that few hundred more you’ll pay is worth those added features you’ll enjoy in return. There’s something to be said for easy to read screens and pouring espresso and steamed milk all in one cup.

The Jura E6 is a great fit for any household of more than one espresso drinker who enjoys a daily caffeinated beverage or two. Its large capacity water tank will allow the brewing up of drink after drink with an average warm up to brew time of 1 minute, 58 seconds.

This machine is not for the office environment since the bean hopper is so small. Nor is it the best purchase for someone who only occasionally enjoys espresso. There are smaller, less expensive machines on the market that will suit the needs of fair-weather drinkers.

Although the milk steaming is somewhat lacking due to the knob turning that must be involved to activate milk, and its inability to vary milk texture, the Jura E6 produces a very enjoyable high-quality espresso or milk-based espresso drink.

The asking price for this machine given its easy to read menu screen, large capacity, built-in sensors, and programmability, is more than reasonable.

The Jura E6 is priced slightly higher than competitors of the same grade. But given the high-quality Jura name, the price makes sense.

Lastly, the Jura E6 is one of the more attractive machines on the market with its simple, sleek lines and elegantly modern design.

If you’re looking to save a little dough, and don’t mind a less intuitive menu design, check out the Jura Impressa C60 or C65. The milk steaming is still somewhat automatic, and the programmability is still there, although diminished. But, the final product is made with the same level of quality as the Jura E6 – just with less bells and whistles.

If you need something even more robust than the Jura E6, say… something for the office, check out the Jura XS90. This big boy has a huge water tank and extra bean hopper along with more precise programmability to handle a small crowd. The Jura XS90 will serve up espresso drinks all day before it runs dry, especially if you hook it up directly to the water source.